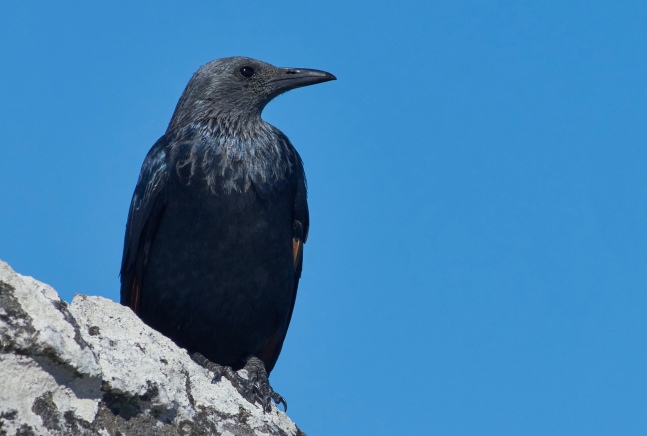 A thirsty crow found a pitcher with some water in it, but so little was there that, try as she might, she could not reach it with her beak, and it seemed as though she would die of thirst within sight of the remedy. At last, she hit upon a clever plan. She began dropping pebbles into the pitcher, and with each pebble the water rose a little higher until, at last, it reached the brim, and the knowing bird was enabled to quench her thirst.

“The Crow and the Pitcher” story is one of Aesop’s Fables, dating back thousands of years. The crow, facing death, comes up with a creative solution to an intractable problem. The moral? Necessity is the mother of invention. (Incidentally, this isn’t a tall tale; scientists recently observed that another type of bird — a “rook” — uses stones to raise the water level so it can drink.)

When faced with adversity, we become innovative, creative thinkers. Early humans crafted spears from stone to protect themselves from predators and to kill animals for nourishment. Weapons of war have impacted the survival of civilizations. Innovative ways to access clean water, healthy food, and safe shelter have meant the difference between life and death.

So, what drives innovation? An insatiable curiosity. A desire to make things better. A commitment to challenging the status quo. Asking and answering: “What if…?” Trial and error. Growth mindset. Brainstorming, hypothesizing, and experimenting.

During COVID-19, necessity drove the creation of new vaccines in record time. It stimulated innovative approaches to remote learning, hybrid work, and virtual entertainment. It rallied teams of scientists, engineers, teachers, superintendents, healthcare workers, mothers, and fathers to ask and answer: “What would it take to…?” and “Why couldn’t we…?” and “How will we…?”

IBM has received the most patents for 28 years running. Its research division has stood the test of time — 75 years of innovation, leading revolutions from programming to semiconductor technology to artificial intelligence to quantum computing. IBM Research’s scientists and engineers are renowned in the industry, driving breakthroughs recognized by Nobel Prizes, Turing Awards, and National Medals of Technology. IBM Research has outlasted other infamous industrial research laboratories — from Bell Labs to Westinghouse to RCA Laboratories. It has incubated technologies that have enabled IBM to reinvent itself for over 110 years.

This week I had the pleasure of judging the finals of a hackathon in my organization. Each team came together with an innovative approach to solving a unique challenge. I was blown away by the solutions, arrived at after only a few days of co-creation, each thoughtfully developed to address pain points that had been plaguing teams for years. Instead of lamenting, “Woah is me, this is so frustrating,” the teams came together to consider and then prototype solutions to mitigate issues. I was inspired by what skilled, empowered teams can accomplish with focus and ingenuity.

For me, innovation is a mindset, a culture, and a way of life. There is probably nothing you could say to me that would make me cringe more than, “We do it this way because this is how it’s always been done.” Isn’t there a better way? A more efficient, more effective approach? A technology that could automate processes? A new business approach that could simplify or accelerate what we do and how we do it? I’m a huge believer that we need to drive continuous improvement, and not only when faced with adversity. To me, innovation is optimistic; it comes from a foundational belief that we can always do better.

There’s no secret formula to innovation. It can include writing disclosures and filing patents, but it need not. It can mean contributing to open source or building on top of the innovation of others, but it doesn’t always. It might be comprised of new technologies or refreshed processes or novel business models. Or none of the above. Or all of it.

“Necessity is the mother of invention” is a well-known proverb, dating back to Plato. It describes how need is often the driving force for new inventions.

A few years ago, I tried my hand at writing fiction. My protagonist was an engineer mom who invented solutions for her kids to everyday problems. Inspired by 1980s TV problem solver MacGyver (who seemed to fix any issue, big or small, with a paperclip and some chewing gum), named after my fierce mother, and channeling my own innovation agenda, her gadgets and gizmos (like The School Bus Tracker, The Electronic Linesman, The Cat Match Registry, and The Body Odor Detector) transformed life for her family. After 65,000 words or so, I had helped my heroine engineer happiness and finished flexing my creative writing muscle, but I hadn’t found a publisher interested in my story. So, I put the manuscript on a shelf.

Earlier this year I gave this blog the same name as my book and have covered some similar topics — including work/life balance, women in science, and advanced technology — this time from my own perspective instead of that of a fictional character. But my message remains the same: nothing is impossible, keep challenging the status quo, and innovate for a better tomorrow.

Photo by Wolfgang Hasselmann on Unsplash