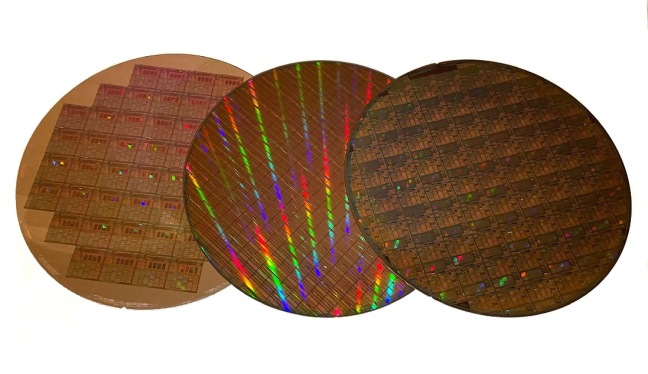 Last year, when our refrigerator was on the fritz, it took months for the local appliance store to get another in stock.

That was at the beginning of the global semiconductor chip shortage that has gotten progressively worse. Instigated by fewer microelectronics manufacturers and exacerbated by the pandemic, today it is becoming difficult to get all sorts of consumer goods — from gaming consoles to washing machines to cars to mobile phones. The chip shortage is impacting inventories, prices, profits, and even national security.

What are semiconductors anyway?

A semiconductor is a special type of material that sometimes conducts electricity. Semiconducting elements like silicon and germanium sit on the periodic table between the metals (such as aluminum or copper, which are good conductors) and the insulators (which don’t allow current to pass through them). Silicon is among the most abundant elements in the Earth’s crust, prevalent in its oxidized form (silica) in sand, dirt, and rock. When highly purified, silicon is used as the base material for most modern electronics.

To make pure, electronic-grade silicon, raw silicon is first heated to a high temperature to melt it. A silicon crystal seed is inserted into the molten silicon and then very, very slowly extracted and cooled, leaving a large crystalline cylinder of silicon called an ingot. The ingot is then sliced into paper-thin, round silicon wafers, which are polished to a mirror shine. Over the years, this process has been perfected, improving the material purity and growing the size of the wafers. Today’s wafers are 300 mm in diameter, roughly the size of a pizza.

What about the chips and transistors?

The magic happens when a blank silicon wafer is turned into hundreds of thumbnail-sized chips — each containing billions of tiny electronic switches — that serve as the “brain” of a computer or game console or refrigerator control panel. These tiny switches are connected to one another by miles of tiny wires, creating an integrated circuit. The switches are turned on (“1”) or off (“0”) at lightning speed, allowing the chip to execute binary-based calculations. These calculations are what allow kids to build structures in Minecraft, airbags to deploy when necessary, Photoshop to render an image, and the freezer to maintain temperature settings.

The tiny switches themselves are transistors — technically metal-oxide-semiconductor field-effect transistors or MOSFETs. Invented at Bell Labs in 1959, they have become the most frequently manufactured devices in history. A transistor is a three-terminal device in which the current between two electrodes (source/drain) is controlled by the voltage at the third (gate). This is where the semiconducting nature of silicon comes in. Through precise control of the material properties, dimensions, and voltages, the electrical conductivity of the silicon can be adjusted at will.

How are integrated circuit chips made?

Creating an integrated circuit is a complex, expensive, and time-consuming process. Today it typically takes months to complete the hundreds of individual steps that convert the blank silicon wafers into functional chips. The silicon wafers serve as the base or substrate and additional materials are deposited, patterned, and etched to create the transistors, wires, and other components. The fabrication process is often described a bit like baking a cake or building a skyscraper, but these really aren’t great analogies. Because here’s the thing: those transistor switches can only be created in the base silicon; everything that gets put on top of the silicon is icing — it’s to connect transistors together, route signals, and interface to the outside world. (Maybe it’s like a one-tier cake with lots and lots of layers of frosting and decoration.)

The process of patterning the wafer is called lithography and it’s similar to the old (pre-digital) photography development process. A light-sensitive liquid (called photoresist) is spun on top of the wafer, and then high-intensity light is shone through a transparent mask (like a photograph negative) and onto the wafer. The mask contains the pattern of transistors and wires, which is precisely replicated in the photoresist when immersed in a developer liquid. The pattern in the photoresist is then transferred into the layer below (which could be silicon, metal, or insulator) through an etching process that eats away at anything not protected by the photoresist. The remaining photoresist is washed away, and the patterning process starts up again; typically, a chip has dozens of patterning steps.

Semiconductor fabrication is done in a cleanroom, a yellow-lit warehouse-like facility in which the air is carefully filtered to eliminate dust particles that could harm chip yields — because dust is more than 1,000 times bigger than the tiny transistors and wires. Engineers and technicians who enter the cleanroom must don full-body coverage: bunny suits, masks, goggles, and gloves to protect the wafers. I personally spent hours and hours in cleanrooms — in graduate school and at IBM — developing new lithography solutions, testing corrosive chemical etching processes, and building transistors. There’s something oddly soothing about being disguised in a bunny suit in a noisy cleanroom, the hum of vacuum pumps and other big machines rattling away. Today, semiconductor manufacturing is largely automated, with robots that move wafers from tool to tool and programmed processes to ensure precision and repeatability.

How has this process changed over time?

From the 1960s on, the semiconductor industry has grown by leaps and bounds. The number of transistors per integrated circuit has doubled about every two years, radically reducing the cost of computing — a phenomenon known as Moore’s Law, first posited in 1965 by Intel co-founder Gordon Moore. To achieve this, transistors must be shrunk dramatically with each technology generation. In 1974 IBM Fellow Robert Dennard published a seminal paper in which he outlined the approach to transistor scaling that preserves functionality, increases performance, and reduces area, which has become known as Dennard Scaling.

By the time I was in graduate school in California’s aptly-named Silicon Valley in the late 1990s, there was lots of talk of “the end of transistor scaling.” Moore’s Law had become a self-fulfilling prophesy, enabled by Dennard Scaling. But how much longer could that go on? We seemed to be hitting fundamental physical limits — the gate insulator material was only a few atoms thick, the tiny transistor dimensions approached the wavelength of light used for patterning. But innovative scientists and engineers have since introduced new materials, device structures, and manufacturing processes that allowed continued scaling far beyond what many thought possible. IBM Research recently demonstrated a 2 nanometer transistor (that’s roughly the width of a strand of DNA!) that promises better laptop performance, longer battery life, and lower datacenter carbon footprints.

What are these chips used for and where do they come from?

Over a trillion semiconductor chips are sold each year in a global market of roughly $450 billion. They are responsible for the “smarts” in every-day items (like appliances, medical equipment, and cars) while at the same time being essential drivers of emerging growth markets (like artificial intelligence and 5G). More than half of the demand comes from the communications and computer industries, with another 30% or so from consumer, automotive, and industrial sectors.

Twenty years ago, there were nearly 30 companies around the world that manufactured leading-edge chips; today there are only five. This dramatic change is attributed to the increasing cost and complexity of the manufacturing process and the rise of fabless companies that focus on high-tech chip designs but outsource the fabrication to the few global companies that serve as semiconductor foundries. Today these are primarily based in Taiwan (led by Taiwan Semiconductor Manufacturing Corporation, TSMC, who alone produces more than half of the world’s supply) and Korea (led by Samsung). China’s commercial semiconductor industry is relatively nascent, but the Chinese government is investing heavily to close the gap.

The United States is responsible for nearly half the global semiconductor demand but only 12% of semiconductor manufacturing. Compare this to 1990 when the U.S. produced 37% of the global chip supply. This change has been primarily driven by economics: it’s cheaper to build and run chip factories in other parts of the world. Intel tops U.S. manufacturing today, with four U.S. production sites. Apple, AMD, and NVIDIA outsource their semiconductor fabrication, primarily to TSMC.

So, what about the chip shortage?

The global semiconductor chip shortage started in 2020, but the semiconductor supply chain was already fragile. The reliance on only a few manufacturers primarily located in Asia is certainly a big contributor. Trade wars and natural disasters have contributed to the problem. But there’s no doubt that the pandemic was the straw that broke the proverbial camel’s back. During COVID-19, demand went up while at the same time chipmakers were forced to halt production due to government shutdowns and COVID-19 restrictions. And we’re not out of the woods yet. German chip maker Infineon (the largest producer of chips for the automotive industry) suspended production in their Malaysia plant in June due to a COVID-19 outbreak. TSMC is grappling with the health crisis as well as the country’s worst drought in 50 years.

All this has resulted in massive supply chain disruptions that have repercussions across industries. Automotive — which uses 500 to 1,500 chips per vehicle — is especially hard hit. Ford, GM, Toyota, Volkswagen, and Tesla have announced impacts to their inventories and production schedules; some of these companies have shut down factories, laid off workers, or decided to build vehicles without certain features. Apple expects reduced iPhone sales. Sony delayed shipment of its new PS5 game console. HP hiked its laptop prices. Microsoft is struggling with constrained supply of Xbox consoles. Whirlpool, LG, and Samsung said they are unlikely to be able to meet demand for home appliances like televisions, microwaves, and refrigerators.

In the spring, U.S. President Joe Biden held a CEO summit on semiconductor and supply chain resilience. According to a White House statement: “The semiconductor shortage, which is impacting American workers and families right now, is a top and immediate priority for the President and his senior most advisors on economic and national security.” The U.S. recently passed a $250 billion bipartisan U.S. Innovation and Competition Act, which includes $52 billion for semiconductor research, design, and manufacturing initiatives.

Most experts suggest that the chip shortage will continue until 2022 and maybe beyond. Chip makers and governments are investing to expand capacity to meet surging demand, but there’s no fast path to ramp supply. The semiconductor supply chain must be diversified and made more dynamic and resilient to adapt to changing and increasing demands across all industries. Increased competition makes the industry stronger, and the U.S. must play a bigger part in this. Intel announced a $20 billion investment to build two new manufacturing sites in Arizona, and both TSMC and Samsung have begun construction of production facilities in the U.S.

In a strange-but-true phenomenon, the semiconductor chip shortage has actually contributed to a potato chip shortage. The agriculture industry uses lots of semiconductor chips too. Farm equipment manufacturers halted their shipments because they didn’t have sufficient supply of chips necessary for their tillers, combines, harvesters, and tractors.

3 thoughts on “When the Chips Are Down”