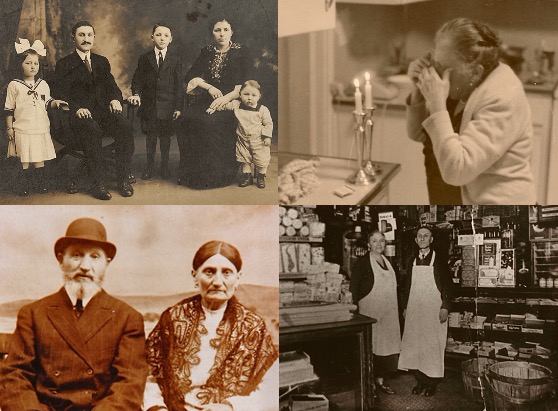 My ancestors hail from Eastern Europe – largely what today is Poland, Belarus, and Lithuania. Most came to America in the latter-half of the 1800s, fleeing the violent attacks against Jews and in search of a better life where they could earn a decent living and practice their religion without fear. Different branches of my extended family all settled in the northeast United States – mostly New York City and Connecticut – near other Jewish families who had migrated there prior. Many came as young adults, started families, and opened small businesses that served the local community.

Over the past decade I’ve enjoyed researching my family history, interviewing relatives, going through pictures and papers, building family trees, and searching materials now available online – like immigration records, ship manifestos, marriage certificates, census data, and newspaper clippings. I’m fascinated by the stories that have emerged that give glimpses of the lives my ancestors led.

The farthest I’ve been able to trace my family back is eight generations on my father’s mother’s side. My great-great-great-great-great-great-grandfather Joseph Wizanska was born in 1720 in Virbalis, Lithuania. When Joseph was twenty years old, he fathered Hirsch in “Russian Poland.” Hirsch’s son Wolf begat Hersch, then came Esriel, Sarah, Anne, my father Michael, and finally me. Over time, their last names were changed, often at immigration – from Wizanska to Borowski to Borofsky; from Millenchick to Melin; from Agranovsky to Granoff; from Walder to Wilder – making it hard to trace and track, especially the women who took their husbands’ names. But many of the stories I can still piece together.

My great-great-grandfather Esriel was born in 1820 near the Polish border town of Filipów. Esriel’s first wife, Riva, with whom he had six children, died young. Soon Esriel married Toba, who had been widowed when her first husband and twin children were shot and killed at the border when fleeing the Polish Army. Esriel was a fairly wealthy farmer and helped Toba raise his children. Together they had three more kids, the youngest of whom was my great-grandmother Sarah. Esriel died when Sarah was only a year old. Toba used her share of the estate to come to the U.S. with her three children, arriving in 1882 and settling on the East Side of Manhattan.

My great-grandfather Samuel was born in Russia in 1875, one of ten children. Samuel left his family at age twenty-one, bound for New York. He established himself as a butcher, providing Kosher meat to Jews in Brooklyn. In New York, Samuel met Sarah, and they were married in 1900. Samuel expanded his butcher shop to a supermarket, serving both Jews and non-Jews. But when he contracted tuberculosis and could no longer handle food, the family moved to the Bronx and opened a laundry that Sarah ran. Samuel and Sarah lived above the laundry with their five children, the youngest of whom was my grandmother Anne.

My great-grandfather Marks was born in Poland in 1865. He immigrated to the U.S. at age twenty-seven, settling near the industrial center of Meriden, Connecticut. He acquired a horse and wagon and took to the streets to buy and sell rags. Later he opened a storefront where he purchased paper and metal items from the public and re-sold them to larger dealers. Marks married Gussie, who also emigrated from Poland, and together they had four children. After Marks died in 1939, the Meriden Record ran this story: “In his will, Marks provided that his junk business, which is expected to furnish the largest portion of the estate, is to go to his son Harry, with the stipulation that he marry a woman of his own faith within five years of his father’s death.” Harry did in fact marry a Jewish woman – my grandmother Anne – in 1940 and secured his inheritance.

My great-grandparents Max and Anna were born in Starodub, Russia in the 1880s. Max, who was the oldest of three boys, studied Torah at Yeshiva and spoke Hebrew, Yiddish, Russian, and Polish. Max and Anna married in 1906 and immediately came to America in part so Max could avoid being conscripted into the Russian army where it was well known that Jews were treated poorly. They were recorded in the 1910 U.S. census living in New Haven, Connecticut, a location they chose because Anna’s cousins offered them a room to rent. Initially, Max got work as a roofer, but because that was incompatible with his fear of heights, he soon took over a corner store, with rooms in the back for his family. Over time, Max and Anna bought and sold various stores, eventually combining several into one to create a “superette” market where they raised chickens in a barn at the back of the store. Every week Anna made 100-pound batches of potato salad, coleslaw, and sauerkraut and barrels of dill pickles. At Passover, she also made pickled herring, beet borscht, and horseradish. Alongside these groceries, the store sold hand-cut cold cuts and meat, ground coffee, and homemade peanut butter. Max and Anna had four children – two boys and two girls; the younger boy was my grandfather Harry, the math teacher.

My great-great-grandparents Joseph Tzvi and Hannah were both born in Ukraine, Russia in the 1850s. They were married in 1874 and a decade later immigrated to Connecticut. Joseph Tzvi became a merchant in New Haven, selling candy and confections. Together they had eight children, two born in Russia and the rest after they were in the U.S. – one of whom was my great-grandmother Anna, who I called “Nana.”

My great-great-grandparents Louis and Mary were both born in Russia and – separately – immigrated to Branford, Connecticut. Louis and Mary met in Branford, married in 1891, and had four children, including my great-grandfather George. George and Nana fell in love and had one daughter – my grandmother Lois, who admitted she was a spoiled only child.

These immigrants learned English, became citizens, practiced their faith, raised families, served in the military, and built businesses and communities. Many sent money back to their families in Eastern Europe, sponsoring their siblings’ and parents’ immigration to the U.S. My grandparents got to know one another in the close-knit Jewish community that formed in New Haven…and the rest, as they say, is history.

It’s a history I find fascinating, and I’m not alone. Millions of others around the world are actively researching genealogy, leveraging websites like Ancestry.com, MyHeritage, and FamilySearch. These give access to digital records, allow smart searches, offer tools for creating family trees, and enable connections with distant relatives who may have data, insights, or stories to share. More recently, over thirty million people have taken DNA tests from companies like Ancestry.com or 23andMe, which analyze a person’s genome to discover ancestral relationships, something I have yet to try.

Websites are useful for facts and figures, but personal narrative is invaluable. I’m fortunate that some of my relatives had the foresight to write down their stories. “My father was a jolly man, with a great sense of humor. He was a sporty type and very handsome. He had two prominent dimples and always had a story to tell,” wrote my grandmother of her father Samuel. “My mother was a whiz at cooking, baking, and making a home feel like home. Friday night was always special, the start of the Sabbath,” wrote my grandfather of his mother Anna. (If you haven’t already, I recommend making a point to share stories and memories with your children and grandchildren, so that your family’s legacy can live on in our collective history.)

Every family’s story is unique and captivating in its own right, with its particular flavor of hope, heartache, struggle, and triumph. I am struck by how unlikely it seems that any one of us is here today. We are products of circumstances – zillions of incidents, decisions, and coincidences – that conspire to bring together the people who made us who we are. What are the chances that a little girl from Poland, a boy from Lithuania, a young woman from Russia, and self-made butchers and grocers and laundresses and junkmen would somehow find one another and build lives together? What if any of these individuals hadn’t been brave enough to set off from their homeland, leave their families, and start a new life halfway around the world? Tiny changes in history would have had profound repercussions.

What do I learn from all this? I come from hearty, devout, hard-working stock. I am fortunate to be here, but luck had little to do with it. My ancestors took their fate into their own hands and created lives full of love and tradition and promise for themselves and their descendants. For that I am eternally grateful.

3 thoughts on “A Family Tree With Deep Roots”