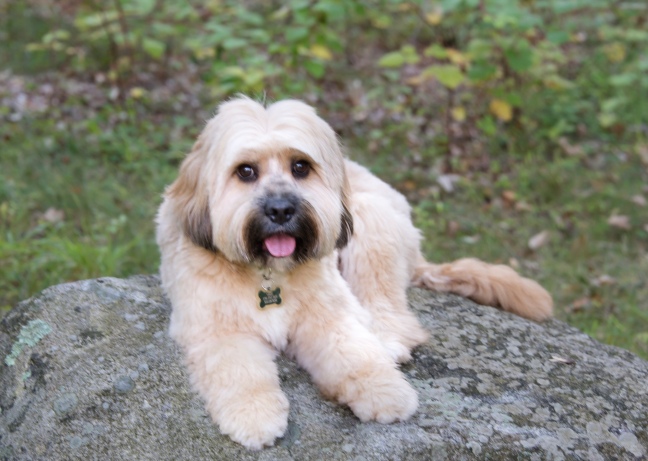 For years I said “no way” to getting a dog. The challenges of work and family, commuting and business travel, dishes and laundry, homework and housework…at times handling these and more has had me teetering on the brink of insanity. Why would anyone in their right mind take on the additional responsibility of caring for a needy animal? I could barely manage to water the plants. “It would push me over the edge,” I said and meant it.

But in 2017, when I was on a leave of absence from work to focus on my family, the prospect of a dog seemed less daunting. I began online searches, reading about the different breeds and the adoption process, which is more onerous than firearm purchase policies in some states. We visited shelters to see dogs up close. The big ones intimidated my youngest son, the slobbery ones made my daughter cringe, and I found the tiny yipping dogs annoying. One puppy was so excited to see us that he ran over and peed at our feet, causing us all to question the wisdom of the endeavor.

After filling out an online application form and supplying multiple character references, we were invited to meet Ozzie, who had been rescued – along with Harriet – from a high-kill shelter in South Carolina and transported to New York. Ozzie was sweet and gentle, not too big and not too small, long-haired and messy (“he looks like Chewbacca”), and the whole family was smitten. Desperate to make the match, I sent a heart-felt email: “Please choose us as an adoptive family for Ozzie! We would happily give him lots of love.” Three days later, we brought him home.

It’s been four years and I truly can’t imagine our family without Ozzie. He’s snuggled next to me at this very moment while I write. He joins us on hikes, comes along on family vacations, sleeps on our bed, cheers up the kids when they are down, is my husband’s bestie, and provides constant nonjudgmental affection and companionship to us all. For anyone who hasn’t had a close family pet, this probably sounds ridiculous, but I assure you it is something special.

Since the pandemic began, there has been a surge in pet adoptions, so much so that many breeders and shelters can’t keep up with the increased demand. Why now? For some, perhaps it’s the same reason I had four years ago: It seems possible now to manage the logistics of walks, training, and care while quarantined at home. For many, pets provide company to combat social isolation and the many stresses associated with COVID-19. Half of all pet owners cited “more time with their pets” as a primary benefit of working from home, and they worry about how their pets will handle it when they return to the workplace.

I enjoy getting glimpses of my colleagues’ furry family members who pop up during video conferences – the cat who walks across the keyboard, the dog sleeping contentedly in the background. My family has gotten to see a lot more of Ozzie this past year. Work and school from home means he’s with us always, content to sleep under my desk during meetings, happy to take a quick walk at lunchtime, clearly enjoying the extra attention.

If you stop to think about it, having animals roam free as pets in our homes is a bit odd. Humans are the only species that have domesticated and tamed other species. Based on evidence from paintings and carvings dug up by archeologists, dogs may have been kept as pets as early as the Old Stone Age. The cat was domesticated in ancient Egypt. The word pet, derived from Scottish dialect meaning “domesticated or tamed animal kept as a favorite,” was introduced in the 1500s.

Today, more than half of all people around the world have a pet in their home. Most common are dogs (33% of households), followed by cats (23%), fish (12%), and birds (6%). The prevalence and types of pets vary from country to country. In Argentina, a whopping 66% of households have a pet dog; Mexico, Brazil, and the U.S. are all over 50% too. Dogs are less common in Hong Kong, Japan, and South Korea (less than 20% of households), where pets in general are unusual. Cats are the dominant pets in Russia and France; birds are dominant in Turkey.

In the United States, pet ownership has more than tripled since the 1970s. Currently, 85 million U.S. households (67%) have a pet – and many in fact have more than one. The U.S. pet market is a $100 billion industry, and pet owners spend annually over $1,300 for a dog and $900 for a cat to cover food, veterinary care, and supplies. Roughly a third of dogs are purchased from a breeder and a quarter are adopted from shelters. Cats are acquired most often from shelters, friends and relatives, or taken in as strays off the street.

More than six million cats and dogs enter U.S. animal shelters each year, and nearly half are either euthanized or die in shelters. Today there are 10,000 rescue groups and animal sanctuaries across the country, funded largely through humane organizations that spend $3 billion annually. Despite the increase in demand for pets during COVID-19, nationwide adoptions from shelters and rescues actually decreased in 2020, while at the same time intake was down and many shelters were forced to scale back or shut down operations.

Instead, people acquired pets in other ways, many purchasing from breeders or pet stores. Hybrid breeds like Goldendoodles, Cockapoos, and Schnoodles have become especially popular because they are hypoallergenic and have sought-after looks and personalities. While there are reputable breeders, there are also many so-called “puppy mills” that breed dogs under abysmal conditions and that produce as many puppies each year as are euthanized in shelters.

You might think that the topic of family pets – seemingly an indulgent and somewhat private matter – might be hidden from the public eye. And yet many world and business leaders are quite open about their furry friends. Ireland’s president has a Bernese Mountain Dog, Canada’s prime minister a Portuguese Water Dog, Finland’s president a Boston Terrier, and South Korea’s president a mixed-breed rescue. Queen Elizabeth II, Russia President Vladimir Putin, and France President Emmanuel Macron are all also dog lovers. In the cat camp: New Zealand’s prime minister, Malaysia’s president, and the United Kingdom’s prime minister, who all publicly celebrate their cats, with pictures showing up in print and social media. U.S. President Joe Biden’s German Sheppard Major is the first rescue dog to live in the White House.

Many corporate bosses are not only pet owners but also support flexible pet policies in the workplace. Pre-pandemic, about 20% of U.S. companies – including Google, Etsy, Amazon, and Salesforce – had pet-friendly offices, which purport to improve employee happiness, retention, and creativity.

So, why all this fuss about four-legged friends? Studies have shown that pets lower stress, reduce loneliness, and improve health – including decreased blood pressure, cholesterol, and triglyceride levels. Pets make us feel needed, improve our self-esteem, build empathy, reduce depression, and provide unconditional love. Children with a pet were found to have lower anxiety. Pets also help us build healthy habits including exercise and socialization.

Yet it seems such an unlikely undertaking: Welcoming a needy, dependent creature into our home and assuming responsibility for vet visits and specialty foods, grooming and teeth cleaning, shots and medication. Arranging pet care during the workday and when we travel. Preventing and responding to injury and disease. And, eventually, contending with that crippling sense of loss when a beloved pet inevitably passes away. Given everything else we’re all juggling right now, why would anyone sign up for all this?

Because the joys far outweigh the inconveniences. I appreciate the fresh air and regular exercise I get taking Ozzie for walks, which often result in spontaneous social contact with neighbors. I treasure his soft, warm fur at my side, keeping me company in the early morning hours before the rest of the family is awake. We laugh when Ozzie barks at a doorbell on the T.V. or howls at the ringing phone. I adore the way my kids rush to hug him when they are sad, the way my daughter asks to FaceTime with him from college, the way Ozzie eagerly watches out the window for my husband to return from work. We know that the responsibilities are worth the unequivocal rewards of having a pet in our lives.

One thought on “For the Love of Pets”