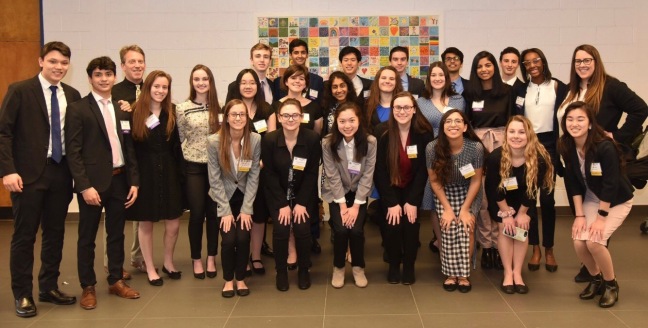 I won second place in the 1986 Connecticut State Science Fair for a project entitled “Boys vs. Girls in Math.” It was my first (and only) science fair experience, prompted by a middle school teacher who saw me as a brainy kid who could handle the extra work. The topic was one suggested by my mother — herself a feminist, lawyer, and daughter of a math teacher.

Together with another eighth-grade over-achiever, we researched math attitudes and aptitudes of girls and boys by conducting surveys and analyzing test scores. We found that, while girls both enjoyed and excelled at math in younger grades, boys passed by them in confidence and proficiency by the time they got to high school. Our prize included a trophy, a chemistry textbook, and a scholarship to a summer astronomy camp.

As the research predicted, I was among only a few girls in AP calculus, in college physics, and in graduate quantum mechanics classes. And it came as no surprise that there was never a line at the women’s restroom at work at Hewlett Packard, Advanced Micro Devices, or IBM Research.

But surely things would be different for my daughter, right? More than thirty years had passed. During that time women had won the Fields Medal, the Turing Award, and the Nobel Prize. The Association for Women in Science, the Society of Women Engineers, and the Anita Borg Institute for Women in Technology had all contributed to the movement encouraging, inspiring, and advocating for women in science, technology, engineering, and math (STEM).

So when my daughter was selected for advanced math in third grade, I (not so innocently) asked her how many other girls were in her class. Only two! I gently raised the issue with her teacher and was assured that the selection was based on objective criteria: grades, standardized test scores, and teacher recommendations. But how could it be that — at the impressionable age of only eight — more boys than girls were told that they were good at math? Wouldn’t we be predisposing the outcomes? Those selected kids would be the ones to go on to take higher level math and science classes. They would be the ones majoring in STEM subjects. They would be the same ones that I would interview for jobs at IBM. And they wouldn’t look at all like me.

It reminded me of the Rosenthal experiment that was run at a South San Francisco elementary school in 1964. At the beginning of the year, teachers were told that certain students — those designated by an asterisk on their class lists — were exceptional and poised to “bloom” academically. Those names were, in fact, selected at random, but — you guessed it — those students nevertheless excelled. Whether the teachers gave them a little extra attention, or the benefit of the doubt, or just believed in them, the designation as exceptional became a self-fulfilling prophesy.

So what about those eight-year-old girls? Or the Black or Latinx children? Or the socioeconomically disadvantaged kids? We need to overtly fight against unconscious bias, proactively push back against stereotypes, and aggressively challenge the status quo. What if each child got an asterisk? What if the teachers thought all kids were exceptional? What if the makeup of advanced math classes was representative of the entire population? I imagine more students would develop positive attitudes and aptitudes. They would develop confidence and capabilities. Or at the very least they would be given the chance to excel.

Today there continues to be a dearth of women in STEM. While women make up half the population, they account for a much smaller percentage of bachelor’s degree recipients in computer sciences (18%), engineering (20%), physics (18%), and math (43%). Women earned less than a quarter of all doctorates awarded in those same fields. On average today women make up 28% of the STEM workforce and account for only 13% of inventors in the U.S. These disparities are even more stark for communities of color.

Why does this even matter? The data is clear: Diverse teams are more innovative and solve problems faster. Diversity is correlated with both profitability and value creation. I’ve witnessed the power of diverse teams coming together to solve problems. A multitude of perspectives — different disciplines of expertise, backgrounds, and experiences — invariably yields better results. And jobs in tech are plentiful, lucrative, impactful, and rewarding. Yet the technology world today remains predominantly the domain of white males, with a smattering of women and minorities working hard to establish legitimacy and eminence.

But there are signs of progress and reasons for hope. Last year I helped my daughter prepare for her high school science fair. She put such attention to detail on every aspect of her poster: hypotheses, data analysis, results, conclusions, fonts, and colors. She rehearsed her presentation, readied herself for questions, and dressed for success in my black blazer. As I walked through the county science fair — proud mom sneaking a peek from afar — I was encouraged to see a wildly diverse group of young scientists — as many girls as boys, representing different races and colors and ethnicities — all passionately explaining their questions and how science had helped them find the answers.

One thought on “Boys vs. Girls in Math”